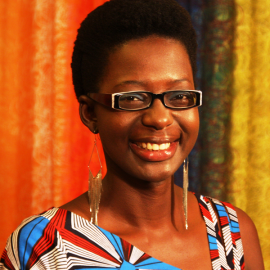 Andéwolé Faladé studied LLCE (Letters, Languages, Foreign Civilizations) at the Sorbonne in 2008 sanctionned with a Master 2 specialization in translation and then obtained a Master's degree in French Literature at UIC (University of Illinois at Chicago) in 2009. She is an independent translator and interpreter in French / English - English /French and she also teaches both languages.

Her interest in the cultural field began in Chicago when she was responsible for promoting Francophone culture at Multilingual Chicago, a language and cultural center. She attached great importance to the different facets of modern Africa.

Back in Cotonou in 2012 after 10 years abroad, she settled as an independent professional. And during her free time, she slowly began to get involved in the artistic and cultural life of Cotonou and Benin through the organization of events (music festivals, exhibitions, assistant director / director ...).

In 2015, she became the President of the MEWI-HONTO Association: Au seuil du peuple noir, for which she was a member since 2008. Thanks to her members, she continued to perpetuate the vision of Max FALADE, its founder: were we really before Western penetration? How was our society organized, what was our way of life, of thinking ... This association whose objective is to collect, preserve and promote the tangible and intangible cultural heritage of Benin through the production of documentary films and also a monthly cultural programs named "My Heritage My Wealth" which is broadcasted on the national television channel the Office of Broadcasting and Television of Benin (ORTB).

A meticulous work to allow the transmission of the knowledge and the traditions to the greatest number in a country where the oral tradition is still the privileged voice of transmissions.